PIETER VAN BREDA was born in Sas-van-Gent in Zeeland, part of Flanders in 1696. He arrived in SA in 1719 on the ship "Spieringh". He was the son of Dirk van Breda and Maria Canarie, and a taylor by profession.

On 17 Aug 1721 he married 17 year old Catharina SMUTS, daughter of Michiel Smuts the elder, also from Zeeland. In 1731, Pieter acquired the Oranjezicht ("Orange View") estate in Cape Town, which was to remain in his family for almost 2 centuries. Pieter died aged 60 at Oranjezigt in 1756 [as reflected in his VOC soldyrekening], as did Catharina aged 77 in 1781.

Oranjezicht, which is now an affluent residential suburb on the slopes of Table Mountain above the Molteno Reservoir, was probably so called either because it overlooked the Oranje bastion of the Castle, or due to the sight of abundant orange trees growing in Table Valley.

Gradually enlarging their possessions was a policy the van Bredas continued to follow until the estate covered the largest part of Table Valley, 213 morgen in the 18th century. Terraces were made for the cultivation of vines, but the main income came from the sale of vegetables and fruit. 300 Slaves were eventually employed on the farm.

The van Bredas were known for their great hospitality and many important visitors to the Colony were entertained on the estate on a lavish scale. Pieter even had his own house orchestra of 30 flute and violin players, in uniform. They performed in one of the many gardens, on a raised bandstand with white-painted stone facing and low stone walls, surrounded by a circle of trees.

The Oranjezicht house was unique in that it was a double storey, with a wood-floor balcony in front supported on 6 columns. Inside were large cool rooms with large windows, superb furnishings and a graceful staircase. It was an antique collector"s paradise. Seven steps led from the paved pathway to the stoep entrance. Behind the house, tier after tier of terraced fields with stonework fronts stretched towards the mountain. Pathways were lined with pine trees. On the east side were several water springs. In front of the house was a large circular fishpond surrounded by a cobbled courtyard. A wide oak-lined avenue of trees formed the main entrance to the homestead. There were also 2 slave bells, the main one hanging suspended between two pillars. Sounded daily at set hours or in case of emergency, it could be heard from Signal Hill to Woodstock. 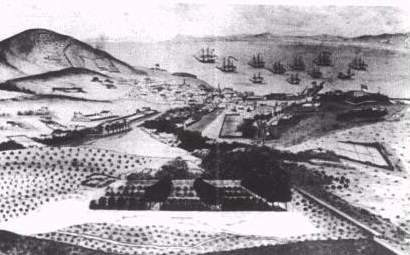 On sale days the bell sounded and a flag was hoisted, the signal for ship"s officers, burghers, and their wives and children to wend their way to the estate to wander through the spacious gardens and fill their carts with fresh fruit and vegetables. Produce was brought to a tree in the cobbled yard where it was weighed on a scale hanging from an oak tree. With exotic flowers adding colour and kilometres of shady walks alongside burbling brooks, it was a pleasureable occasion for all.

The demise of Oranjezicht started in 1877 when, in spite of being entailed, the Purchase Act enabled the Municipality to buy more than 12 morgen on which to construct water reservoirs. Five years later another act released further portions of the estate and the municipality also acquired rights to impound the water from the many springs on the estate. Without water the farm became quite useless, and the owners were forced to pay urban rates and taxes too.

Members of the family continued to live there well into the 20th century, but gradually more and more land was sold until ultimately there was little left except the double-storey house in Sidmouth Ave. Its interior was a veritable museum, since the van Bredas brought lovely furniture, silverware and art treasures from Europe to their home. The house was eventually also purchased by the City Council in 1947, supposedly to be turned into a civic museum. However in Aug 1947, 287 antiques were auctioned and on I April 1955 the homestead was demolished to make way for a sports club and lawns. Now only the name of the suburb remains of the proud van Breda possessions.

Pieter and Catharina only had two children, a daughter Maria born in 1724 who married Arend de Waal. and only one son to propagate the surname, Michiel, baptised on 17 May 1722. He inherited the family farm Oranjezicht. Aged 24, he married Wilhelmina de Kock, whose family also originated from Zealand, on 23 Oct 1746. Michiel died at Oranjezicht aged 55 in 1777, and his wife 2 years earlier. They were the parents of 8 children :

(I) Susanna,born 1747,married to HO Loubser.
(2) Pieter, born 1750,Captain of the Citizen Force in Cape Town. He played a leading role in the Patriotten Movement against Company Officials. He married Catharina Sophia Myburgh on 27 Nov 1774, and after her death he married Hilletje Smuts, widow of Willem Versveld and owner of Nooitgedacht. Pieter inherited the family farm Oranjezicht in 1777, but also owned 6 houses in Cape Town and was a partner in the farm Bakkelysplaats near Swellendam. After his second wife died in 1797, he married, on 30 Aug 1802 the third time Margaretha Wilhemina Michielse. He had 5 children, including 2 sons Michiel (1775) and Johannes Albertus (1777) and Pieter (c1803).
(3) Servaas, born 1752, Lieutenant in the Citizen Force, married Johanna lsabella Hurter on 20 Oct 1782. He had 6 children.
(4) Catharina Cornelia, bom 1754, married to N Acker.
(5) Alexander, born 1755, married Johanna de Wet on 30 Sept 1781 and remarried Helena Hendrika Michielse on 5 July 1795, they had the following sons Michiel (1786), Jacobus Alexander (1788), Pieter (1791) and Alexander Pieter (1794). He also supported the patriotten Movement. He was the owner of Rheezigt, currently (1995) the ministerial residence of minister Roelf Meyer, and later of Boshof, currently (1995) owned by plastic surgeon Dr. WD Francois Malherbe. Alexander had 14 children, 6 from his first marriage and 8 from the second, including 3 sons Johan Adam Michiel (1801), Servaas Francois (1803), and Gerrit Hendrik (1806).
(6) Maria Geertruida, born 1758, married to JJ Hamman.
(7) Arend, born 1760.
(8) Arend Josias, born 1762, married Catharina Agatha Volsteedt on 18 Feb 1787, and remarried Elisabeth Petronella Ehlers on 14 April 1793. He had 8 children.

Compiled by Martina Louw (descendant of Alexander)
This email address is being protected from spambots. You need JavaScript enabled to view it.
Some corrections and additions by Mike van Breda